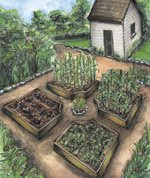 Illustration of a typical Pennsylvania Dutch kitchen garden, called Four-Square Gardens. This illustration is from the Renfrew Institute for Cultural and Environmental Studies.
Although the original raised beds were devised by residents of Swiss cloisters and monasteries, the early Pennsylvania Germans are known for bringing it to the colonies. Many Pennsylvania Dutch* or Germans were from areas of German speaking Switzerland. Many migrated through Germany before emigrating to the US.
At this period in time, there were "rules" for these raised beds (raised beds is the current terminology). Rules of the era for Pennsylvania German kitchen gardening were:
The prime function of raised beds was to allow easy drainage and conditioning of the soil. It allowed the planting of seeds long before access to muddy fields in the spring. Great attention was given to keep the soil loose. Cultivation was only done with a hoe. There was never any pressure on the soil from standing or pressure from hands.
Seeds were precious and failure of a crop meant going without food. What may seem silly rules actually was tried and true methods of maximizing produce. Without these families perished.
There was a difference between field and garden crops. Cabbages, potatoes, turnips and field peas were grown in the farmer's fields by the men. The woman's kitchen garden provided at least two crops a year such as English sweet peas, lettuces, spring onions, radishes, carrots, peppers, eggplants, tomatoes, cucumbers and melons. Other popular plants were spinach, savoy cabbage, and popcorn.
Sometimes the fences that surrounded the gardens were used to support vines and fruit bushes. One important vine was hops. The dried flowers were used in making bread, beer and stuffing pillows.
Although the Four-Square layout is often used for herb gardens, the Pennsylvania Germans didn't have herb gardens as we understand them. Space was too precious and few flavor enhancers were used besides onions, parsley, sage and dill. Some Mennonites used Saffron from crocus "savitus" but it's very labor intensive.
In those times, these gardens were placed near the kitchen door and near a source of water since raised beds typically drain easily and need more frequent watering during droughts.
Since the Pennsylvania Germans were among the first in the US to barn, pen and pasture their animals, it allowed them to collect manure, which was applied to both the gardens and fields.
Flowers had no place in the Four-Square gardens unless for their food value. Decorative flowers, if planted at all, were not in the gardens. Some show a small round circle in the middle of the garden (see illustration). These are planted by Protestants with the Adam & Eve plant (yucca) or Roman Catholics used Rosemary as a symbol of the Virgin Mary.
Some flowers were grown to repel beetles and they used organic "lethal" insecticides such as tobacco dust and arsenic based compounds. Mostly insects were simply picked off the produce by the women and children.
There are many raised bed sides and corner devices sold commercially. They can also be made from cement blocks, stone, and sheets of metal. It's according to what you want, how you want it to look and what you can afford. If you can do the labor yourself, the price is decreased significantly.
Raised beds are an excellent way to garden if you have back problems or for the wheel chair bound. They are an excellent way to maximize a small yard.
*Pennsylvania Dutch is a corruption of the German word "Deutsch" which means German. Although we typically identify Pennsylvania Dutch with the Old Order Amish and Mennonite, it also describes emigrants of other religions from the same areas in Switzerland and Germany who migrated prior to the 1800s.
I found this interesting garden information while researching my family who were German speaking Mennonites from Switzerland. They migrated to Pennsylvania in the 1700s. Another little tidbit of information that helps fill in pieces of the big puzzle.
Posted by Diane Gibson at 1:01 PM 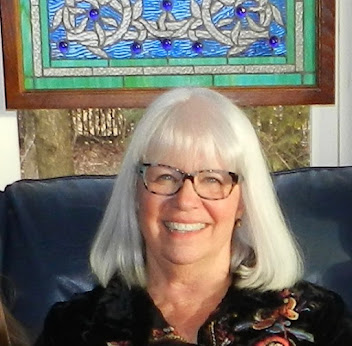 Diane Gibson
I have successfully completed the University of Illinois Master Gardener program. This BLOG contains my articles that have been previously published in the Galva News (Illinois.) Because it is a weekly and my articles are only inserted every other week, I decided to use the BLOG for information that is more timely, things that need more space to explain and to include pictures. Hope you enjoy. NOTE: Mention of commercial (wholesale/retail) venues does not mean my personal endorsement or guarantee of any kind. Although they may be used by me, you should always investigate your choices and those choices will be your responsibilty including in your gardens, your financial circumstances and your satisfaction levels. 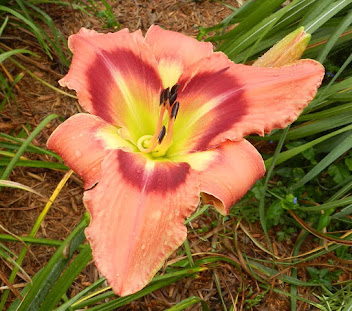